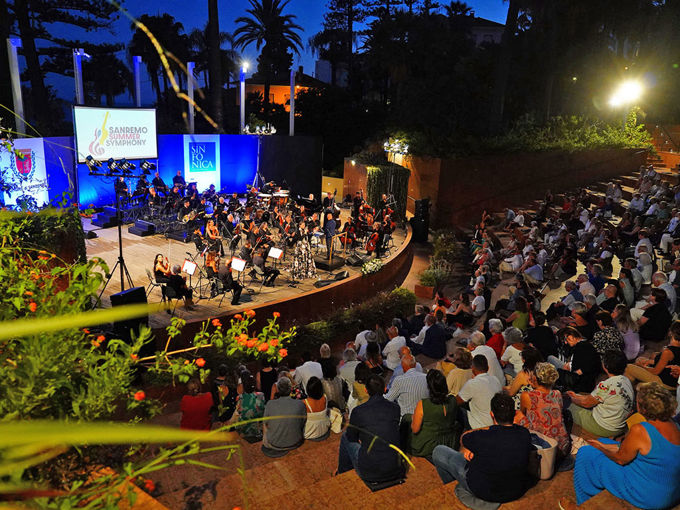 The Sanremo Festival is undoubtedly the city's musical event par excellence. But in the pearl of the Riviera dei Fiori music is a constant, a sort of background track that accompanies every moment and prominent event organised in the area. Animated like a cheerful melody, another local musical excellence positions itself: the Sanremo Symphony Orchestra.

The history of the Sanremo Symphony Orchestra

The Sanremo Symphony Orchestra is one of the oldest and most prestigious musical institutions in Italy. Founded in 1905, it became part of the 12 Orchestral Concert Institutions recognised by the State and has also been a Cultural Institution of Regional Interest of Liguria since 2003. In addition to the skill, competence and extraordinary talents of the musicians, what makes the Sanremo Symphony Orchestra special is the careful enhancement of the young artists whose skills and qualities are brought to their prime under the watchful eye of the Artistic Director and Principal Conductor, Maestro Giancarlo De Lorenzo.
In addition, the great versatility of the Symphony Orchestra is a real added value where the team of artists can perform at their best with both classic and romantic, modern and contemporary repertoire.

The Sanremo Symphony Orchestra's calendar of summer events is full and packed with events that are perfect for both children and adults. There is room for music in all its forms with live performances by Ute Lemper, New Trolls, Decamerock, Cecilio Pera, Cristina D’Avena, Morgan, Antonella Ruggiero, Fabrizio Bosso and many others... Here you will find all the scheduled appointments plus the links to purchase your tickets.

Music in the villages

To enhance not only the city of Sanremo as much as possible, but also the extraordinary villages of the hinterland, the Sanremo Symphony Orchestra has also given life to the exhibition entitled "Music in the Villages".
The ultimate aim is to transport the magic of live music even to those places that often cannot enjoy these shows and the excitement they bring with them for the most disparate reasons. The Orchestra will play at Monte Calvario, Cipressa, Torre Paponi, Bajardo and San Romolo and the Orchestra will perform the Ouvertures from the works: The Marriage of Figaro K. 492, Così fan tutte K. 588 by Wolfgang Amadeus Mozart and La cambiale di matrimonio, Il Signor Bruschino, La scala di seta, L’Italiana in Algeri, Il barbiere di Siviglia all by Gioacchino Rossini.

Let's get carried away by the music

These are mere tastes that provide a notion of the Sanremo Symphony Orchestra's mission and skill. Now it is time to experience this musical dream and let yourself be transported by the notes while discovering Sanremo and its surprising hinterland.