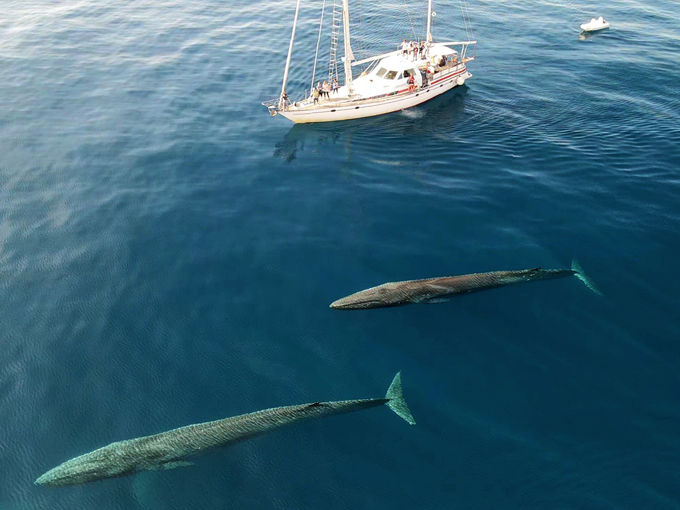 Pelagos Sanctuary: discovering the cetaceans of the Ligurian Sea

Among the many strengths that a stay at the Royal Hotel Sanremo brings, we simply couldn't fail to mention the Pelagos Sanctuary. Looking out from the rooms of the Hotel, you can see the spectacle of the Ligurian Sea, which is part of a marine protected area of 87,500 km² called the Sanctuary of the Cetaceans Pelagos. during a boat trip, it is not uncommon to come across dolphins, whales, sperm whales and other cetaceans that inhabit this area.

The Pelagos Sanctuary was founded thanks to an international agreement between Italy, France and the Principality of Monaco to preserve marine biodiversity. Moreover, this area has been defined as a large ecosystem, to protect it and increasingly help the many realities and associations that deal with the study and preservation of cetaceans.
The sperm whale "Royal" was named after the Hotel’s 150 anniversary
To celebrate the 150th anniversary of the Royal Hotel Sanremo, let's take the Tethys ONLUS Institute, an organisation dedicated to conserving the marine environment through scientific research and public awareness, which has given the name Royal to a beautiful specimen of a sperm whale!

It is one of the largest animals you can meet during a Whale Watching excursion to Pelagos Sanctuary. It can measure up to 18 metres with a weight that exceeds 40 tons. Generally, to see the sperm whales, it is necessary to go rather far away because they live close to the Continental Escarpment where they dive to hunt their favourite dish, the giant squid, diving as far as 2,000 metres in depth.

Cetaceans from Pelagos Shrine arrive at the hotel

To celebrate the event, but also to raise awareness among the public and guests about the biodiversity of the Pelagos Sanctuary, this summer in the Hibiscus Room of the Royal Hotel Sanremo you can admire the photos selected among the most beautiful and exciting taken by the researchers of Tethys that portray whales, sperm whales, pilot whales and streaked dolphins thrive in the waters of the Pelagos Sanctuary.

In addition to the snaps, guests will also find an informative totem that shows some of the most important characteristics of cetaceans that can be observed during Whale Watching excursions.

Knowing the sea means respecting it

To protect marine ecosystems, as we have already mentioned, each of us can do something, starting with a very simple act such as getting informed, or helping the conservation of cetaceans with a donation.

The Royal Hotel Sanremo wants to help all its guests get to know the Pelagos Sanctuary and the animals that inhabit it. This means getting more in tune with this extraordinary universe: knowing that spectacular whales, playful dolphins and imposing sperm whales live here, we will look at the sea with greater respect and we will perceive it as an important part of us.