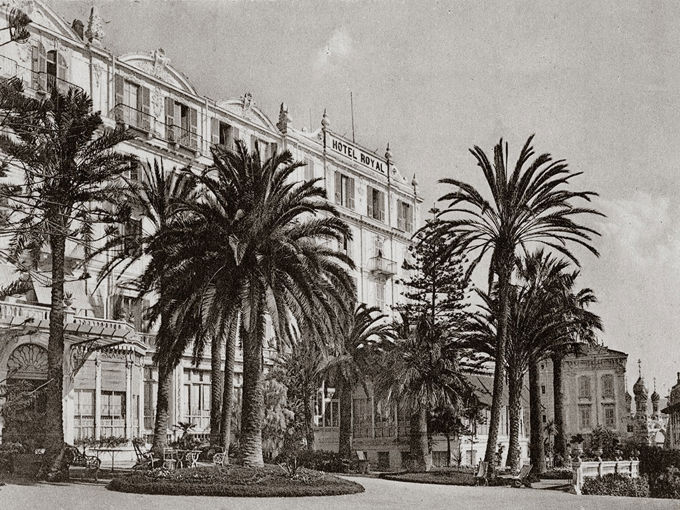 150 years of Royal Hotel Sanremo: a story written alongside you

2022 marks an important milestone for the Royal Hotel Sanremo. Indeed, we are celebrating the 150th anniversary of the Royal Hotel's opening and to make the most of it we have lined up numerous special events and appointments to share with you who have always been at our side.

Before discovering them all, we want to walk you through our history, because every salient moment of the Royal Hotel Sanremo's life is also yours!

The Royal Hotel Sanremo: from an olive grove to the beating heart of Sanremo hospitality

One of the first curiosities about the Royal Hotel Sanremo's history concerns its birth. Around the middle of the nineteenth century when the entrepreneur from Turin, Lorenzo Bertolini, decided to open an inn bang in the heart of Courmayeur. It is an aristocratic, luxury meeting place, which has welcomed many customers from all over Europe for years. The inn's success was so great that it soon became the first Royal hotel, thanks to the concession of Queen Margaret who spent the summer there.
After the first success, the entrepreneur Bertolini began looking around and discovered that Sanremo was rich in potential, in the heart of the Ligurian Riviera di Ponente. So he decided to buy some land cultivated with olive trees near the promenade and began to build the Royal Hotel Sanremo following the project of the architect Alessandro Cantù: in 1872 the Hotel was inaugurated.

The years of rebirth after the Second World War

From father to son, the Royal Hotel Sanremo expanded and improved increasingly, becoming a reference point for the upper class of the moment. At the end of the Second World War, the serious damage caused to the structure by the bombings forced Lorenzo Bertolini's grandchildren to transform it again, giving it new life and reopening it on 25 December 1946 with the name of Hotel Royal Sanremo.
In conjunction with the expansion of the spaces, the prestigious Restaurant Fiori di Murano and the extraordinary swimming pool with sea water created by the architect Gio Ponti were inaugurated: elements of great prominence that contribute to the Hotel's growth and fame throughout Europe.

The success of hospitality reaches the present day

Moving on to more recent times, the Royal Hotel Sanremo has been managed by Edoardo Varese, a fifth-generation heir since 2006. With the establishment of the engineer, the Hotel is oriented toward the future with a very attentive look to communication and the enhancement of historical heritage.
Thanks to the collaboration of General Manager Marco Sarlo and his "Ten Year Business Plan", the orientation and position that the Royal Hotel Sanremo has had since 2009, are perfectly identified with respect to its competitors. Thus new services have been created, rooms are renovated and new concepts are applied in the management of every aspect of the Hotel.

The Royal Hotel Sanremo is a member of the prestigious global luxury hotel brand "The Leading Hotels of the World", where it was a founding member, demonstrating, once again, the future-oriented look in the world of hospitality travel. It was awarded an important international recognition by becoming a partner of Virtuoso, a consortium of travel agents specialising in luxury travel, and in 2020 it also joined the "Signature Travel Network".
150 years have passed since its inauguration and numerous things and realities have changed around the walls of the Royal Hotel Sanremo. But what will never change is its atmosphere, timeless charm and a warm welcome to all guests. For this reason, more than a classic anniversary, we want to celebrate with you 150 years of hospitality and excellence in service this year, plus attention to detail and unconditional love for all our guests. And we want to wish you another 150 years packed with happiness, smiles and unforgettable moments shared together.
Stay with us to discover the rich programme of exclusive events that we have organised for this 2022 season. Because the Royal Hotel Sanremo will never cease to amaze you: a stay here is not just a holiday, it is an unforgettable experience.